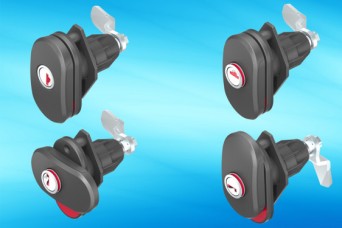 Our new Double Red compression latch handle offers dual level security and more comfortable operation for cabinets, door and covers. This new locking solution is especially tailored to the numerous storage boxes in caravans for example where luggage and safety equipment is stowed. Thanks to the innovative closure technology it is also suitable for applications in wider sectors of industry and transport such as specialist vehicles where it is often a 1-to-1 replacement for existing industry standard systems. As both opening mechanisms are marked by a red ring visual indicator, the new lock is called the Double Red – it is classified shock proof and vibration proof, as well as offering IP65 protection.

Unlike many older solutions on the market, the Double Red latch handle has two components which exercise a security function – the lock cylinder and the compression latch itself. If the cylinder is turned by 90 degrees with the key, the latch is unlocked and the first opening indicator becomes visible under the lock cylinder. If the user then turns the latch handle by 180 degrees, the second opening indicator becomes visible and the door or panel can be opened as usual. The system is based on a turning-compression mechanism with a gasket compression range of 6 mm.

The advantage of this patented new system is a much more flexible operation whereby all storage boxes of a caravan, for example, can be closed without using a key. If the lock cylinder is in the closed position, it is sufficient to turn the latch into its starting position and to push in the cylinder with the finger or thumb.